Choral is a language for the programming of choreographies. A choreography is a multiparty protocol that defines how some roles (the proverbial Alice, Bob, etc.) should coordinate with each other to do something together.

You can use Choral to program distributed authentication protocols, cryptographic protocols, business processes, parallel algorithms, or any other protocol for concurrent and distributed systems. At the press of a button, the Choral compiler translates a choreography into a library for each role. Developers can now use your libraries to make sure that their programs (like a client, or a service) follow your choreography correctly—see Choral’s methodology. Choral makes sure that your libraries are compliant implementations of your choreography, makes you more productive, and prevents you from writing incompatible implementations of communications—see Choral’s advantages.

Choral is currently interoperable with Java, but we plan on extending it to support also other programming languages in the future. Choral is compatible with Java in three ways:

Choral is a prototype: it is developed as part of an ongoing research project (see the about page), and future releases might break backwards compatibility. It is already usable for early adoption and teaching. If you’re curious, you can try it out yourself and get in touch with us!

Want to talk about Choral?

If you have questions, comments or you would just like to express your interest in the Choral project, you can either directly contact the Choral development team or use (and upvote!) the related threads on

Programming distributed systems gives you headaches because you need to figure out how to correctly coordinate multiple programs that interact via side-effects, which you need to manually control (send/receive over channels). If you made some mistakes, finding what went wrong is even harder, because you have to figure out all the possible sequences of communications that can happen (and go wrong) during the concurrent execution of your programs. Testing is hell, as it requires the integration of many distributed components, mocking, etc.

Choral relieves some of those headaches because you can write as a single program, the whole coordination (protocol) that you want your distributed system to follow. Choral is also friendly to Java programmers (and close to C++, C#, Kotlin, Swift, etc.) because is extends its syntax with a new kind of (higher-kinded) types to let you express things like “the Client communicates this to Service, then Service communicates that to the Login Provider, then […]”. In practice, Choral wraps the headache-mongering side effects within type-safe abstractions, so you can concentrate on the high-level details of the implementation.

If you introduced some incompatibilities between the description of how you want your programs to coordinate and how actually implemented it, the Choral compiler reports you that error and helps you solve it (as it happens with the Java compiler). Moreover, Choral comes with a testing tool (ChoralUnit) that helps you write integration tests with the simplicity of unit tests, performing for you the runtime (integration) tests on your distributed system.

In essence, you program with the simplicity of plain old sequential programs, but you get distributed systems with decentralised control with and strong correctness guarantees. This allows you to use or distribute them to your customers with a higher level of confidence on their reliability. You can also reliably compose different Choral(-compiled) programs, to mix different protocol and build the topology that you need.

If you just want to glance at how a Choral program looks like, you can jump to Alice, Bob, and Carol go to a meeting and then come back here for the details.

Choral is an object-oriented language with a twist: Choral objects have types of the form T@(R1, ..., Rn), where T is the interface of the object (as usual), and R1, ..., Rn are the roles that collaboratively implement the object. (Technically, Choral data types are higher-kinded types parameterised on roles, which generalise ideas previosly developed for choreographies and multitier programming; more on that at the end of this page.)

Incorporating roles in data types makes distribution manifest at the type level. For example, we can write a simple program that prints hello messages in parallel at two roles Alice and Bob.

Class Hellos is not very interesting, because Alice and Bob do not interact. Interaction is achieved by invoking methods that can “move” data from one role to another, like the com method of interface SymChannel. We give a simplified view of this interface below—see the details in the documentation of channels.

Choral does not fix any middleware: as long as you can satisfy the types of the choreography that you are writing, you can use your own implementations of communications and existing Java code in Choral. The Choral type system forces you to specify the communication requirements of your choreographies explicitly (channel topology, type of transmissible data, etc.).

Using channels, we can write more interesting choreographies, as we can see in the next example.

Alice, Bob, and Carol go to a meeting

Alice calls Bob to ask if they could have a meeting with Carol on some topic. Bob wants to know whether Carol could go first, so he asks her. If she can go, then he considers it himself. In the end, Alice needs to know the final result on whether the meeting can take place from Bob.

We can define this protocol as the class below. Note that Choral borrows the forward chaining operator >> from F#: in the following, expression >> object::method means object.method(expression).

Development Methodology (or: what Choral does) 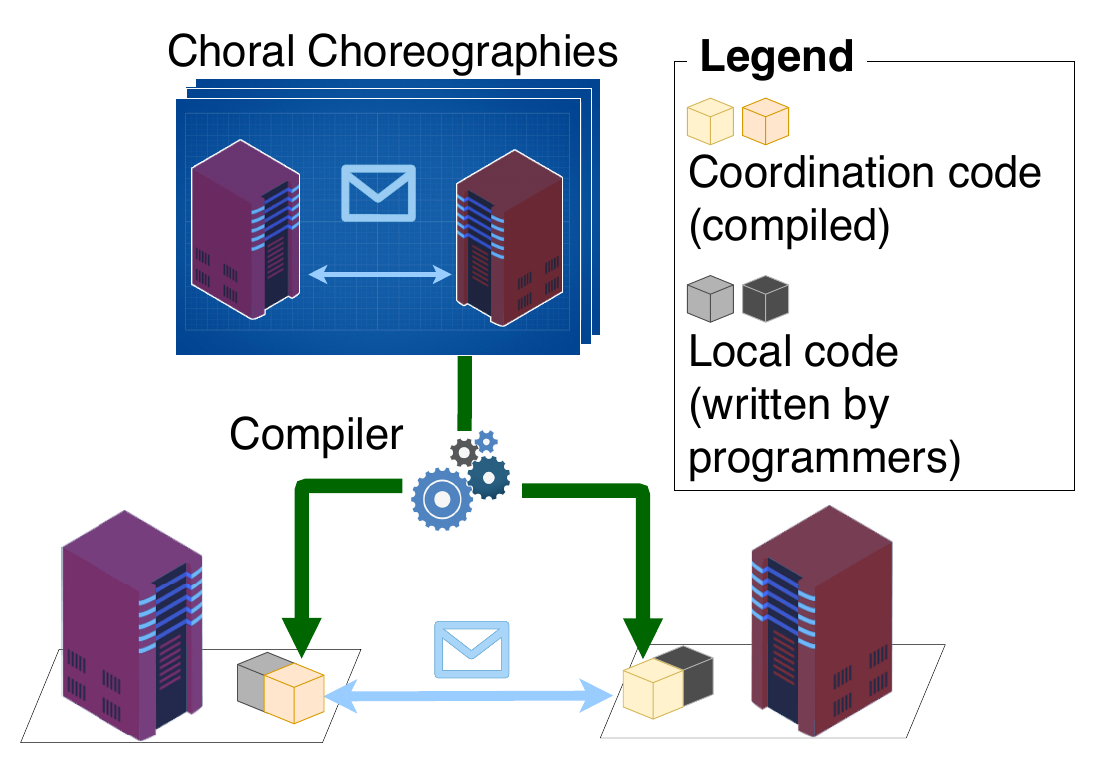 Choral is designed to generate correct implementations of choreographies as Java libraries. In Choral’s development methodology (figure above):

For example, given a choreography like the one above for the roles Alice, Bob, and Carol, the Choral compiler generates a Java library for each role. Each library offers an API that the programmer can use inside of their own project to participate in the choreography correctly within a concurrent/distributed system.

Let’s have a look at the code that would be generated for Alice’s Java library.

Notice that all code that has nothing to do with Alice from the choreography has disappeared. In other words, Alice does only what pertains her.

A Java developer can now import MeetingVote_Alice and invoke method run to coordinate correctly with third-party implementations of Bob and Carol.

This was a simple example. Wanna see something more realistic? Jump to our documentation.

What advantages does Choral bring?

We think that Choral has the potential to be especially relevant for business processes, microservices, security protocols, and distributed services in general.

If you’re interested in programming languages, want to know more about how Choral works and how it relates to other works, please refer to the article Choreographies as Object. Choral has been influenced by previous work on choreographic programming and the theoretical models that inspired multitier programming, like hybrid logic and Lambda 5. 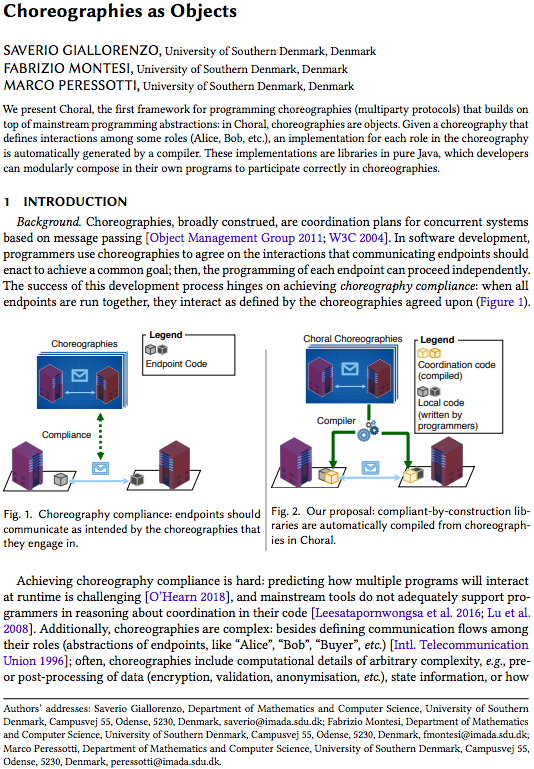